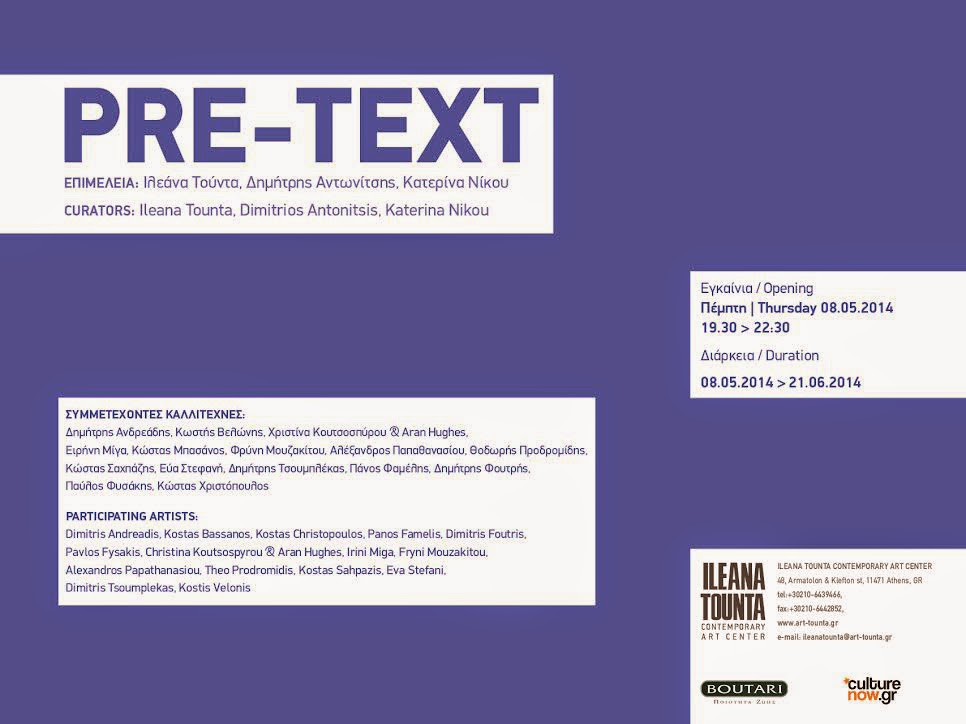 
Pre-Text is the first part of the large scale exhibition This Is A Historic Opportunity For Us (title taken from Antonis Pittas’ work). The idea of this exhibition came up as an internal need and an immediate response to the socio-political crisis that Greece has been through since 2009 as it is one of the first European countries to confront the aftermath of the global crisis. This Is A Historic Opportunity For Us is a project that has been designed since 2012 aiming to find the appropriate venue to host the exhibition in a European metropolitan city.


Pre-Text refers to socio-political conditions with connections to political history and our perception regarding historical knowledge. Through the works, the viewer “reads” a concrete political meaning that depends upon the dialectic of individuality and collectivity at play within a social system. They conjure up a universe of individual worlds that invoke contemporary awareness and use it as a prism through which to look upon how we experience reality. The artists explore areas where there are no rigid distinctions between theory and practice; where the boundaries between the two seem to blur.


Pre-Text questions the ways in which the past is conceptually and contextually reoriented towards the future. As a great number of contemporary philosophers argue “prior” is the new “after” and the notion of time transforms accordingly to continuous changes of social conditions. The viewer faces an up-to-date historical record of art that confronts the future as the present, art that talks about the future with works, created the last five years and function as knowledge tools to understand the present by reflecting it to the future.
The works suggest different readings and interpretations that aim to provoke the viewer’s perception regarding global sociological issues that affects one’s perception and individual participation to a collective “status quo”.