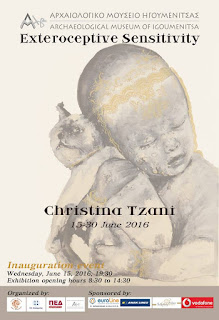 Christina Tzani’s art focuses on child figures. Each painting incorporates a way of viewing which leads the viewer to conclusions, always depending on their own aesthetic perception. Its basic intention is to enable the viewer so that they can perceive the artworks’ conceptual approaches by choosing the most dominant one according to their own criterion of correctness. The viewer is called to acknowledge their own deeply ingrained assumptions of aesthetic and empirical perception thus indicating that the concept of perception is a continuous process of definition and question.

The painting’s signs predispose the ontological and conceptual substance of the meaning’s intervention as it is determined by the communication of the artist’s and the viewer’s spiritual state.

The subject’s presentation influences the viewer’s interoceptive sensitivity by revealing the motive of the artworks’ painting actions in direct relation to the viewer’s ego.

The exhibition called ‘Exteroceptive Sensitivity’ will open at June 15th in the Igoumenitsa Archaeological Museum and it will last until June 30th.