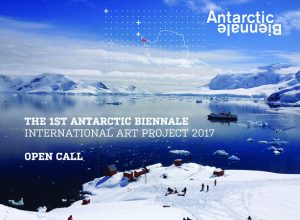 
“Antarctica is the last free continent. It belongs to no state and, according to international agreements, is intended exclusively for creative activities and scientific research in the interests of all of humanity. It is pure, hard to reach, and mysterious—like Art itself! The sixth continent resembles a white sheet of paper, upon which artists from different countries might draft new visions for life in the 21st Century.”
–Alexander Ponomarev (Commissioner, The Antarctic Biennale)
The Organizing Committee of the Antarctic Biennale is pleased to announce an international open call for an artistic project to be realized in Antarctica, as part of the 1st Antarctic Biennale. Artists under the age of 35, working in any medium (including installation or performance), are invited to apply. Projects may be manifested on land, ice, or water, or else onboard the biennale’s expedition vessel. Proposals should take into consideration the following aspects—logistics, mobility, proportionality to space, ecological compatibility, artistic expressiveness, and conceptual acuity. In accordance with the principles of the biennale, no materials will be left behind. All proposals must respond to the biennale’s motto: “Mobilis in Mobile.”
The competition jury will include Alexander Ponomarev and members of the biennale’s Artistic Advisory Board—Defne Ayas, Hans Ulrich Obrist, Hoor Al-Qasimi and Nadim Samman.
15 finalists will receive invitations to participate in a group exhibition at the Antarctic Pavilion (Venice, summer 2017).
In spring 2017 the author of the winning proposal will join a group of globally celebrated artists (including Tomás Saraceno, Hani Rashid, Matthew Ritchie and more) onboard the polar research ship Akademik Ioffe, departing from Ushuaia for the Antarctic Circle to realize their projects. The Organizing Committee anticipates the subsequent re-installation/performance of the selected work (or its documentation) in a series of exhibitions at international museums in the months following the expedition.
We also invite video submissions to be considered for inclusion as part of the Antarctic Biennale Cinema screening program onboard the biennale expedition vessel (curated by Nadim Samman). Selected works may be included in subsequent exhibition projects.
The biennale’s Commissioner, Alexander Ponomarev, had this to say about the initiative: “This is a biennale ‘upside down’: instead of the usual national pavilions—the icy inaccessibility of the Antarctic continent. Instead of pompous apartments and hotel rooms—ascetic cabins. Instead of chaotic creative wanderings, through receptions and tourist filled streets—a dialogue with big nature and an explosion of consciousness facilitated through the dialogues with scientists, futurists, and technological visionaries.”
Deadline for applications: October 3, 2016 (11:59:59pm CEST)
Finalists announcement: October 2016
Winner announcement: December 2016
For more information about the Antarctic Biennale, also read THIS ARTICLE.