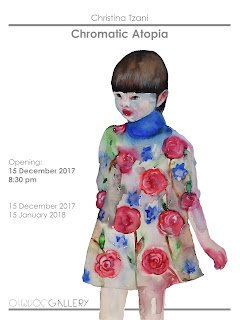 
Through the use of the watercolor medium children figures are depicted brightly colored suggesting an imaginary society. The images are thoughtful, their glances intense and they are adorned with highly decorated garments. This way a colorful symphony evolves and develops, concealing and overwhelming the viewer’s enjoyment at the same time introducing a doubt as to the figures intent. The absence of space, the atopic space maybe considered as a reaction of oversensitivity, creating a momentary impression of a surface opened up and continuing its visual bond to the surrounding space. The redness of the figures hands reveals forcefully the sensitivity of the young protagonists and demystifies the management of the visual representation in connection to the viewer’s interpretation.


Christina Tzani was born in 1985 in Athens, Greece. She has a B.A in Fine Arts (Honours) from the Fine Arts School of University of Western Macedonia, Florina, Greece with Harris Kondosphyris and Thomas Zografos as her supervising professors. She has many solo exhibitions as well as many participations in significant group exhibitions with most important solo exhibition in KH5 Gallery in Zurich ‘Forgotten Whispers’, 2016, in the Archaelogical Museum of Igoumenitsa, “Exteroceptive Sensitivity”, Greece, 2016,“Tender Wounds”, at GalleryX, Dublin, Ireland, 2016 as well as at group exhibitions Biennal of Drawing, Osten, Skopja, more over at Fresh’15: Happy Accidents, Action Field Kodra, Thessaloniki  as well as in Slovenia at Biennial Castra 2015, Lokarjeva Galerija also in Turkuan France at Fid Prize 7, Esä’s Grande Gallerie and also in Athens Greece at 7th Bienall of Students of Fine Arts Schools of Greece, Foundation Theocharakis. She has been awarded from Osten and WAVA organizations as ‘Young Balkan artist 2017’. She lives and works in Greece. Christina’s work can be found in public and private art collections both in Greece and in abroad.